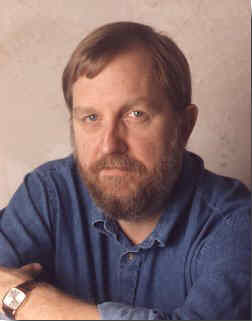 This is a hard one to introduce. I first heard this work sometime early on in my undergraduate college days. I can't say I fell totally in love with it at first. I still found 20th century works to be difficult to listen to, but the work quickly grew on me, especially due to one section.

But we'll get into that shortly.

Joseph Schwantner is a prolific American composer originally from Chicago. Unlike many composers, his main musical instrument was not piano but was, instead, guitar. I'm most familiar with his wind ensemble work, rather than orchestral, but he's written in both genres, as well as chamber music. His list of commissions is incredibly long. His music is known for its unique colors and his ability to draw on music from a huge variety of musical sources.

I love this quotation from him about his music: "I didn’t realize until many years later just how important the guitar was in my thinking...to get to the bottom line, when I think about my music, its absolutely clear to me the profound influence of the guitar in my music. When you look at my pieces, first of all is the preoccupation with color. The guitar is a wonderfully resonant and colorful instrument. Secondly, the guitar is a very highly articulate instrument. You don’t bow it, you pluck it and so the notes are very incisive. My musical ideas, the world I seem to inhabit, is highly articulate. Lots of percussion where everything is sharply etched, and then finally, those sharply articulated ideas often hang in the air, which is exactly what happens when you play an E major chord on the guitar. There are these sharp articulations, and then this kind of sustained resonance that you can easily do in percussion - a favorite trick of mine! I think it is right in my bone marrow. I don’t think there is any question about that. I think my music would look differently if I were a clarinet player. So it doesn’t mean I sit around thinking about the guitar when I am writing a piece. Not at all! There is something fundamental about how I think about music, that I think comes from my experiences as a young kid trying to play everything I could on the instrument."

Ok so back to the work. There I was sitting in Hosmer Hall listening to the wind ensemble perform it when somewhere in the middle of it, about 6:30 in, this brass chorale came out of nowhere and almost knocked me out of my seat. My hair stood up on my arms and I leaned forward and just GAPED. I couldn't believe it. You see, this was the warmup the brass section played before each of our marching band competitions. It was just this MOMENT out there before we went onto the field. They'd start and we'd all stop warming up, drift closer, listen intently, and then cheer when it was over. It basically worked us all up and at that moment we were ready. It was a "call to arms" of sort. I had always assumed Nick (our arranger) had written it. I was shocked to find out where it really came from and floored to have that brass chorale heard in such a different situation.

...and the mountains rising nowhere was Schnwatner's first work for wind ensemble. It was commissioned by the Eastman Wind Ensemble and premiered in 1977. The work is dedicated to children's author Carol Adler. The title comes from one of her poems.

Schwantner said of the work: "While the work is not specifically programmatic, the poem nevertheless acted as the creative impetus for the composition and provided for me an enigmatic, complex, and powerful imagery creating a wellspring of musical ideas and feelings in sympathetic resonance with the poem."

You can listen to the work here. That brass chorale I mentioned above starts around 6:30.
Collapse