Gosh it feels like AGES since I've gotten out and taken a bunch of pictures. Today was gorgeous...mid-30s and partly cloudy. So I took Dahlia for a walk and got some photos. I didn't get as many as I wanted though. Either my battery didn't charge up totally or something is wrong with it because I got in about 60 shots before it died. Now, mind you, I was taking them in RAW+JPG so each shot took up about 15MB in two different files. So I guess it's possible that takes up more battery power? But still...I came away with around 130-140 files from this battery which is WAY less than I usually can get. I'm going to hope that perhaps I just didn't charge it all the way. Sometimes the thing gets unplugged slightly and I don't notice. The light goes out when it's done charging so maybe it really was out because it was slightly unplugged. We'll see!

So anyway, I went out to lunch with my mother and then came back to her house to hang out. Dahlia and I went for a walk out at the nature preserve behind the local middle school and I took my camera along.

First, I forgot to include some of the other photos I got on Thursday that I really liked.


Today we took Dahlia to another nearby park, Thornden Park, for a little fun. Lots of pictures were had, of course!

OMG guys it was 65 degrees out this afternoon and the SUN finally came out. It's been one hell of a miserable week: rainy, windy, dismal, even a bit of snow that didn't stick around. But today it finally looked spring-like!

After session today, we took Dahlia out to the park with our cameras. 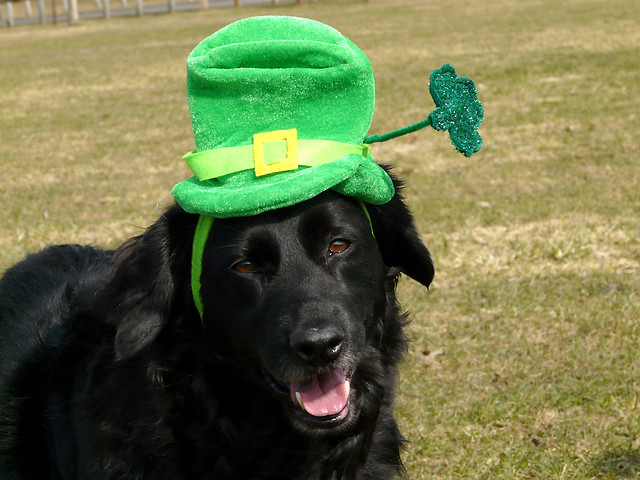 So like I said, BEAUTIFUL day (and no, the snow is NOT all melted, so the contest continues!). It was in the mid-50s and sunny for most of the day. So we decided to take Dahlia down to the park. We mostly wanted to get some photos of her with silly St. Patrick's Day things on (ok ok so *I* wanted that!) but we ended up having a total blast there!

I ran to the store in the morning to get some eggs yesterday and on the way there I saw this really super awesome snowman. So when I took Dahlia out for her walk, I took my camera to get some pictures of it. And then Dahlia and I went around the whole pond.

Along the way we met a few dogs, one of which was a young houndy/pitty/labby looking dog named Hershey. He was off leash and was obviously interested in coming to Dahlia. I always go to hook her up just in case and the woman called out "He's friendly." I told her Dahlia was too and so she let him come greet her.

Well, Dahlia was frozen in a stalking posture, which didn't seem to put him off. And he came BARRELING at her at full speed. Usually this would result in a dog who was freaked out. But it didn't!! He ran right up to her, play bowed and took off and she ran off after him. They raced around and back and forth. Dahlia was running so fast that she skidded out once or twice. Unfortunately I didn't get any photos of the play time because the light was crap and they were moving SO fast. And I was more worried about keeping out of their way. lol


Unfortunately we yet again lost a bootie. Which sucks because it's going to be BITTER cold tomorrow and David will need to walk her. God knows where the damned thing fell off. I backtracked and looked EVERYWHERE but couldn't find it. I'm thinking it might have gotten lost in the yard she pooped in. But I went into it and thought I saw it and came up with a frozen piece of dog shit. Yuck. This guy NEVER cleans out his yard! Come spring there's usually dog shit all over it.

On the fun side, we met a little 9 week old puppy. Poor little guy didn't want to walk because it was so cold (and booties kept getting eaten off...lol). He was a little nervous about Dahlia at first but she laid down and then he got to meet her. He came right up to me. The guy was told he's a lab/chow mix but didn't think he had chow and the vet said "I have no idea where they got THAT from." The dog does have a spotty tongue so you guess where? Yeesh. They think it's more likely he's a lab/BC mix from his markings. He definitely looks like it. Cute puppy either way!

Last night we took a very quick walk in the cold. Dahlia kept wanting to cross the road and I kept telling her that it was a BAD idea because the road had been pretty clearly heavily salted. But she doesn't seem to listen to me too well (lol) and kept insisting. So I let her cross. The way over was ok because she chose a spot that wasn't too heavily salted. But then, after sniffing around over there, she wanted to cross BACK over.

Here was where we ran into a problem. After taking just a few steps into the middle of the road, Dahlia started limping. I got her to move a few more steps so that we were ALMOST to the side of the road, but then she suddenly stopped. Sat up in a sit pretty in order to hold her two front paws off the ground, and then simply flopped over and onto her back.

In the middle of the road.

So I'm trying to clean off her paws when I see a car coming and of COURSE they need to turn up the road we're on. We're RIGHT at the corner and she sees us and stops. I get Dahlia up and on her feet and she's hobbling. The woman rolls down her window and asks if she's ok, do we need a ride home or anywhere? She said she saw the dog laying down in the road and thought the worst: that she had been hit by a car.

Imagine my mortification when I had to tell the woman "Oh no, my dog is just a DRAMA QUEEN over some salt on her paws." I know it must burn, but geez louise my dog is a HUGE drama queen. I didn't even clean her paws off again when she got over to the side of the road because she was all happy and excited and wanted to go greet the nice woman. She went bounding up to her without a bit of a limp in her gait.

Oh Dahlia. *headdesk* I guess on the good side I don't have to worry about her never showing pain? I mean, she's a drama queen about a little bit of salt. Can you imagine how she'd be if she REALLY hurt?

My gosh how is it possible that tomorrow is 2011 already? There's not much to say about this year. It's been a year. Plenty of fun times, like Dahlia's agility class, and some bad stuff, like being fired from CC (which ultimately is probably a good thing!).

We've had a relaxing day here in Vermont. We took Dahlia up to the cemetery for a bit of a run and some exercise and of course brought our cameras! So here are Dahlia's final 2010 pictures.

It's STILL snowing. I have no idea how much we have right now as the Golden Snowball guy hasn't updated since 9:30am yesterday. I'm dying to find out what the heck we have!

David took Dahlia out today and got more pictures of her in the snow. To recap, first:

I feel like I haven't taken any new photos of Dahlia in ages (ok so it's been like a couple weeks) and today was beautiful, 60 degrees and sunny, so I thought I'd take my camera out for some photos while on our walk.